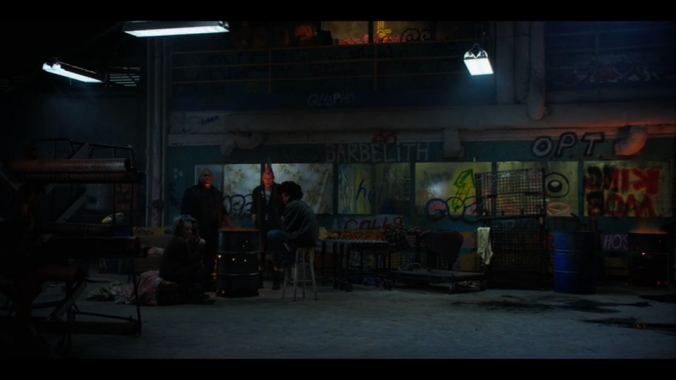 Look, I’m not saying The Duffer Brothers are necessarily “The Invisibles” fans. The walls are.

In episode seven of the second season of their smash hit “Stranger Things”, Eleven encounters a gang of misfits that apparently read and were very affected by Grant Morrison’s epic masterpiece of a comic book, their lair is covered in references to “The Invisibles”. In the picture, in white above them, you can clearly see the “Barbelith” graffiti, an essential part of the story. And to the far right, reversed in a window, there’s the “King Mob” tag. Both are drawn exactly like those in the comic book.

What does this means to the “Stranger Things” story? Probably not much, it’s just an easter egg. A very sophisticated and cultured easter egg, only the cool people know about “The Invisibles”. Not to brag, but I’ve been writing about it in my blog in Spanish.

After the jump, the “King Mob” tag from the other side of that window, with another “Barbelith” above and a reference to Tom O’Bedlam:  END_OF_DOCUMENT_TOKEN_TO_BE_REPLACED

In your face, world.

For the untrained eye it would seem like this blog is failing. I opened it a year ago and my posts have zero traction, I’ve only gathered a few followers and I seldomly update it. The detail you’re all missing has always been clear and in the open, the objective of this publication is to find honest jobs for me out there in the wilderness of the Internet. I announced it. Twice. In that regard, the success is evident. I’ve been working, and that’s the main reason things have been so quiet around here.

Examples and stories after the jump:  END_OF_DOCUMENT_TOKEN_TO_BE_REPLACED